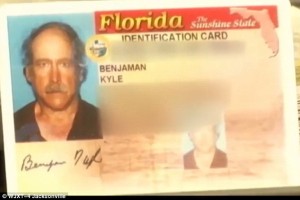 The story of Benjamin Kyle is something out of a Hollywood movie trailer, a man wakes up broken, bloody, and bruised in a Burger King dumpster in Savannah, Georgia with no recollection of who he or how he got there. Unfortunately that is the exact reality Benjamin Kyle has been living for the last 11 years, since coming to in a hospital bed in Savannah. With no ID or identifying information on his person, he’s lived the last 11 years struggling to figure out who he is and how exactly he ended up in that dumpster. Without a social security number, driver’s license, or even a library card, there was almost no recourse for Mr. Kyle and experts diagnosed with one of the most severe cases of retrograde amnesia seen in recent times.

Countless news outlets and government agencies took up his case trying without effort to help him gain some portion of his identity so that he could rejoin the world. Efforts to find family or someone who might know his identity proved fruitless and Mr. Kyle was stuck. He eventually was able to find a job along with room and board from a kind business owner who heard about his story in the news, and had resigned himself to living with his new reality.All of that changed when a genetic researcher named CeCe Moore and her team decided to take up his case, a little over two years ago.

Where the FBI, Department of Homeland Security, and Florida law enforcement agencies had failed CeCe and her team were able to prevail! For the first time in almost a decade Benjamin Kyle now knows the things that so many of take for granted ie. where he’s from, his family, and most of all his origin.

Our fascination with this story and it’s relevance to genetic medicine primarily has to do with the amazing method by which Cece Moore and her team unraveled the mystery of Benjamin’s identity. By utilizing genetic databases commonly used to search for the origin of an adoptee’s birth parents and some small pieces of information Moore’s team was able to successfully identify Benjamin. They’re waiting until he can actually connect with his family whom he has not seen since the late 70’s to release that information into the public sphere. Everything about this story points to the importance of genetic data, and a missing person’s case is a minor use that having nationwide genetic databases could assist with.

Genetic Researchers Prevail Where the FBI Could Not

Before we get into the controversy surrounding government and genetic databases, let’s address for a second the implications of this particular case. An issue that perplexed agencies with seemingly limitless powers to identify people was flummoxed.Homeland Security and the FBI have some of the most comprehensive tools on the planet and access to almost all government databases that would be remotely relevant and yet they still could not solve this. What did was the breakthroughs in gene sequencing and genetic research that genetic scientists have been laboring on all these years. While not directly responsible, they’ve all contributed in a major fashion. The only information that was an absolute truth for Benjamin Kyle was his genetic makeup. From there came the answer to this decade long mystery

Using genetic research to solve what seems to unsolvable cases is not just in the realm of CSI and Hollywood crime drama fantasy. While we are acutely aware of the costs, time, and effort it takes to generate results using genetic data, we are supremely optimistic that as advances in the science and technology steadily decrease costs associated with using genetic medicine, it will become far more prevalent.

In our next post we will examine some of the arguments for and against genetic databases on a national scale.