Pharmacogenetic testing: The diagnosis of the future 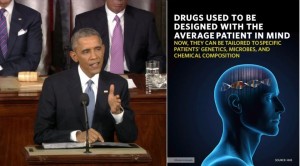 During the State of the Union, President Obama talked about how the Precision Medicine Initiative, or pharmacogenetic testing, will aid doctors in the near future for the treatment of different illnesses and diseases. He was firm in stating that our old methods are out dated, and it is time that America expands its’ pharmacogenetic data on finding new cures for crippling diseases:

“I want the country that eliminated polio and mapped the human genome to lead a new era of medicine — one that delivers the right treatment at the right time… Tonight, I’m launching a new Precision Medicine Initiative to bring us closer to curing diseases like cancer and diabetes — and to give all of us access to the personalized information we need to keep ourselves and our families healthier.”

Pharmacogenomics will help doctors in the future personalize medicine.  When utilizing pharmacogenetics, doctors will have the ability to identify successful treatment plans for patients whom are dual diagnosed, with greater success.

In the 1950’s, scientist found that there is a correlation between drug responses and genetic variation according to the texbook  “Pharmacogenetics”  by Wendell Weber; however, today, we do not use pharmacogenetic testing to assist a diagnosis.  Now doctors won’t have an excuse about it being a financial problem.  President Obama is giving $215 million towards pharmacogenics to be used in the testing of 1,000,000 people.

WHY DOES PHARMACOGENETIC TESTING MATTER?

Adverse Drug Reactions (ADRS).  These account for a large portion of the medical fatalities annually in the United States.  If the data from the testing was utilized, then physicians in the United States could actually practice precision medicine which is what Obama hopes for.  By creating this library of test data, we can see what drugs are effective for each patient at the right time, minimizing fatalities.